Waite, Arthur Edward (1857 - 1942)
225; occultist and co-creator of the Rider-Waite Tarot deck. "This was notable for being one of the first decks to illustrate all 78 cards fully, as opposed to the 22 major arcana. Golden Dawn member Pamela Colman Smith illustrated the cards. The deck was first published in 1910."; 901; Wikipedia entry

Walker, Foley
31; special assistant to Scarsdale Vibe, "deputy of Wealth", 99; substitute conscript for Vibes during the Civil War, subsequently taking a bullet to the head, which gives him the ability to hear "communications from far, far away," 100ff; 156; 330-333; "righteous men who believed it was God they heard whispering" 334; in Göttingen "the angel, if not of death at least of deep shit," 619; "the 'other' Scarsdale Vibe" 724; Civil War veteran, 725;

There is a possible connection to playwright Christopher 'Kit' Marlowe (author of Dr Faustus) here, in that Chris 'Kit' Traverse makes a Faustian bargain with Vibe, via Foley Walker, Walker perhaps playing Mephistopheles to Vibe's Lucifer. There's also a hint of bilocation in Mephistopheles's claim to be simultaneously with Faustus and in Hell. Also, the three men present during the fight in which Marlowe was fatally stabbed were Ingram Frizer, Nicholas Skeres and Robert Poley, this last being not too far from 'Foley'. Also, among the sixteen jurors at the inquisition into Marlowe's death was one Adrian Walker. So, Poley and Walker, Foley Walker. Coincidence?

Coalhouse Walker is a character in E. L. Doctorow's Ragtime, a novel that overlaps with ATD in some time frames and in some themes. 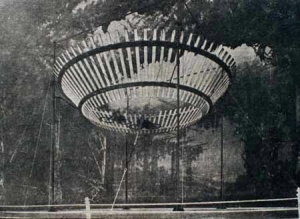 
184; The Wall of Death is a circus sideshow featuring a drum- or barrel-shaped wooden board wall around which stunt motorcyclists drive and carry out tricks. The audience views from the top of the drum looking down. The bikes start in the middle at the bottom of the drum and drive up an initial ramped section until they gain enough velocity to drive horizontal to the floor, defying gravity. this is a famous act in British society and is often scene in towns and fairs. In modern society there are only a few remaining tours of the wall of death, the most notable of which is "the wall of death world tour", created and run by the Fox family. Wall of Death Website


326; located in Shoreham, Long Island, New York, this 94' by 94' brick building was designed by architect Stanford White. The tower structure was completed in 1904. The transceiver was never fully built due to economic problems.

Weierstrass, Karl (1815-1897)
500; a German mathematician who is often cited as the "father of modern analysis"; Weierstrass functions, 594; Wikipedia entry

Whitechapel
678; Whitechapel is a place in the London Borough of Tower Hamlets, England. It is a built-up inner city district located 3.4 miles (5.5 km) east of Charing Cross and roughly bounded by the Bishopsgate thoroughfare on the west, Hanbury Street on the north, Brady Street and Cavell Street on the east and Commercial Road on the south. Jack the Ripper, the unidentified serial killer (or killers), was active in the largely impoverished Whitechapel area and adjacent districts of London in the latter half of 1888. The name "Jack the Ripper" is taken from a letter to the Central News Agency by someone claiming to be the murderer, published at the time of the killings; Rippercetta, 680; Wikipedia entry] 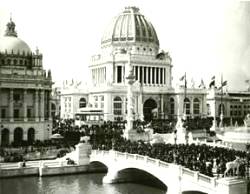 The White City, Chicago, 1893
3; Costing over a half billion in today's dollars and covering 686 acres, the 1893 World's Columbian Exposition and Fair in Chicago was a grand sight to its 27 million visitors -- a planned layout of large, classically inspired buildings (what we now call the Beaux Arts style) all built on the same scale and all painted white -- hence, the nickname of "The White City." And within and around those white buildings was the most amazing display of 65,000 exhibits depicting (to quote the Exposition promoters) "all of the highest and best achievements of modern civilization; all that was strange, beautiful, artistic, and inspiring; a vast and wonderful university of the arts and sciences, teaching a noble lesson in history, art, science, discovery and invention, designed to stimulate the youth of this and future generations to greater and more heroic endeavor." 10; 36; Dally think about, in Chicago, 336; More from the "Encyclopedia of Chicago"

444; Whitehall is a road in Westminster in London, the capital of the United Kingdom. It is the main artery running north from Parliament Square, centre of national government, towards the traditional Charing Cross, now at the southern end of Trafalgar Square and marked by the statue of Charles I, which is often regarded as the heart of London for its residents and tourists. Along its way it is lined by many government ministries; "Whitehall" is therefore also frequently used as a metonym for governmental administration, as well as being a geographic name for the surrounding district; Wikipedia entry

Wilde, Oscar
185; 536; Wikipedia entry; Wilde's lecture tour of the USA in 1882 took him to Leadville; while there he was invited by the mayor to tour the Matchless silver mine and open their new lode. It was in a Leadville bar that Wilde saw the notice, "Please do not shoot the pianist. He is doing his best."; echoes of The Picture of Dorian Grey, 231; Wikipedia entry (Leadville)

Williams and Walker
344; "coon review"; Bert Williams and George Walker, in the first decade of the twentieth century, became the most famous black entertainers in the world. They had teamed up in California in 1893, came to New York in 1896 as "Two Real Coons," and two years later were making a dance called the cakewalk all the rage. Williams and Walker, as they were then known, made American theatrical history by bringing the first black musical, In Dahomey, to Broadway in 1902.

Williams, Charles
219 ff; see Williams The Greater Trumps for another example of an intersection of the Greater Arcana with quotidian English life.

Wilson's Theorem
862; The theorem was first discovered by the Iraqi mathematician Ibn al-Haytham (known as Alhazen in Medieval Europe) circa 1000 AD, but it is named after John Wilson (a student of the English mathematician Edward Waring) who stated it in the 18th century. Waring announced the theorem in 1770, although neither he nor Wilson could prove it. Lagrange gave the first proof in 1773. There is evidence that Leibniz was also aware of the result a century earlier, but he never published it; The details on Wikipedia...

Windy City
3; aka Chicago — the origins of the nickname are in dispute and they are explored in this Wikipedia entry.

Wolf-Ferrari, Ermanno (1876-1948)
512; "hometown luminary" composer, 741; born Ermanno Wolf, an Italian composer best known for his comic operas, I quattro rusteghi (1906) and Il segreto di Susanna (1909). A number of his works were based on plays by Carlo Goldoni, including Il campiello. Wikipedia entry

World-Island
"the Great Wife-Bazaar of the World-Island, 433; 445; 567; 1022;
The phrase was coined by English geographer and geo-politician Sir Halford John Mackinder who formulated Heartland Theory (1904) in his address to the Royal Geographic Society, "The Geographical Pivot of History." "World-Island" refers to the continuous landmass of Eurasia measuring more than 21 million square miles (54 million km²). This landmass contains no waterways to the ocean and is contained by the Arctic ice cap and drainage to the north, the monsoon lands along the Pacific Ocean and the Indian Ocean, the Near East or land of the Five Seas, and Europe. This landmass is remote and inaccessible to its periphery. Mackinder argued in his address that this was the strategic region of the foremost importance in the World. The Heartland theory hypothesized the possibility for a huge empire being brought into existence in the Heartland, which wouldn't need to use coastal or transoceanic transport to supply its military industrial complex but would instead use railways, and that this empire couldn't be defeated by all the rest of the world against it; See also Geopolitics in Wikipedia

World War I
578; World War I, also known as the Great War and "The War To End All Wars," was a global military conflict which took place primarily in Europe between 1914 and 1918. More than nine million soldiers and civilians died. The conflict had a decisive impact on the history of the 20th century; Wikipedia entry

Wyman, Pap
88; Owns the eponymous Pap Wyman's Saloon where Mayva is working when she meets Webb Traverse. Bartenders at the saloon are "Adolph" and "Ernst".