Lafrisée, Pléiade
537; sphinxe Khnopffiene in Kursaal in Ostend; with Woevre, 560; Fernand Edmond Jean Marie Khnopff (1858-1921) was a Belgian symbolist painter. A sphinx is a mythical creature with the head of a human (or bird) and the body of a cat; A sphinxe Khnopffiene would then be someone cat-like in the style of Khnopff Wikipediaentry;

The Caress, Khnopff's most famous painting

Lard Scandal of the '80s, the great
406; there actually was a lard scandal during the Taft Administration, in 1912; 1887 saw the introduction of the Margarine Act in Great Britain, which required margarine to be labeled as such. This was in response to the adulteration of butter by oleomargarine (made from animal fats).

lateener
250; a ship rigged with a lateen which is a triangular sail, suspended by a long yard at an angle of 45° to the mast.

Cf., also the transdimensional travel of Buckaroo Bonzai in the Pynchon inspired film, The Adventures of Buckaroo Bonzai Across the 8th Dimension (1984), especially the images of 8th-Dimensional creatures that Bonzai sees as he passes through the mountain. IMDB entry.
Cf., further, the notion of a "multiverse," that is, a physical ur-structure, comprised of many, if not infinite universes, of which ours is only one. Several contemporary cosmological theories require that a multiverse exist, though its existence remains highly conjectural. Wikipedia entry.

"laying on tells"
218; God, in poker game; "tells" are gestures or words by a player that give away the value of his/her hand; Wikipedia entry

Leadville
78, 85, 88, 89, 103, 186, 274, 283, 286, 303, 314, 374, 650, 975, 977, 980, 981. Leadville, Colorado—administrative seat of Lake County (see above)—is the highest active city in the United States (altitude 10,152') and the place where the Colorado Silver Boom began. Silver-lead deposits were discovered in the area in 1876, and the town was founded in 1877 by a group that included Horace ("Haw") Tabor (AtD, p. 274)—owner of the Matchless Silver Mine, and later Leadville's mayor and the founder of its Tabor Opera House. By 1878 Leadville had become one of the world’s greatest silver-producing sites and a center of regional cultural activity. During the 1880s, when Leadville’s economy was at its peak, the town was the second largest in Colorado and a mecca for prospectors, gamblers, retailers, performing artists, and entrepreneurs. Oscar Wilde visited the Matchless mine and lectured at the Tabor Opera House during his tour of America in 1882, and Doc Halliday, of O.K.-Corrall fame, settled in the town around 1883. In many respects, Leadville's history epitomizes the volatile character of Colorado’s mining industry--from the rush to establish businesses, schools, churches, and newspapers in a booming mining camp to the conflict and violence of the miner’s strike of 1896. The town declined after 1893, with the Repeal of the Sherman Silver Act. Its population in 1880 was 40,000; in 2000, 2,821.
Leadville is in the news again today (February, 2008) because a ballooning mass of water, saturated with mining-educed toxins, has accumulated in the abandoned mine-shafts and drainage tunnels in the mountains above the town and is threatening to burst out, inundate Leadville, and send a flood of poisonous water downstream.

League of Prizren
653; created on June 10, 1878 in a mosque in Prizren, Kosovo, by 300 Albanian nationalist leaders, mostly from Kosovo, Albania, Western part of former Yugoslav Republic of Macedonia, and Muslim leaders from Bosnia-Hercegovina and the Sandzak, in order to achieve an autonomous Albanian state, representing the former Ottoman vilayets of Shkodër or Skutari centered near Montenegro, the Illyria region, the Chameria region, Janina or Janjevo centered in Northern Epirus, Bitola in Republic of Macedonia and Kosovo; Wikipedia entry

Le Prince, Louis Aimé Augustin (1841-1890)
1050; Frenchman who was an inventor and is generally recognized as the first person to record motion images on film. Wikipedia

LeStreet, Chester
1042; black jazz musician client of Lew Basnight, named after Chester-le-Street, a small town between Durham and Newcastle in Co. Durham, UK. No doubt TRP noted this wonderful name while researching Mason & Dixon in Durham. Other local place-names he may have been tempted by but didn't use include Thornton-le-Beans and Hetton-le-Hole (which as Hetty-le-Hole could have been an appropriate moniker for Ruperta Chirpingdon-Groin).

Levi, Eliphaz (1810-1875)
232; or Eliphas; pseudonym of French occultist and magician Alphonse Louis Constant. Levi incorporated the Tarot cards into his magical system, and as a result the Tarot has been an important part of the paraphernalia of Western magicians. He had a deep impact on the magic of the Hermetic Order of the Golden Dawn and later Aleister Crowley (who believed himself to be the reincarnation of Levi), and it was largely through this impact that Lévi is remembered as one of the key founders of the twentieth century revival of magic; 901; Wikipedia entry

Lincrusta-Walton
610; Lincrusta is an embossed fabric used for covering walls, similar in style to anaglypta. It was invented by Frederick Walton in 1877 and is also called Lincrusta-Walton or Lincrusta Walton. It was designed to emulate more expensive materials and hence be more oriented to a mass market. These materials were used to enrich the interiors of late Victorian architecture and now used for historic restoration projects.

Linderfelt
1013; lieutenant in the National Guard at tent city in Ludlow

Little Egypt
26; at the Chicago World's Fair; 29; Little Egypt was the stage name for two popular exotic dancers, Ashea Wabe who danced at the Seeley banquet at the 1893 World's Fair and Farida Mazar Spyropoulos, also performing under the stage name Fatima, appeared at the "Street in Cairo" exhibition on the Midway at the World's Columbian Exposition, held in Chicago in 1893; Wikipedia entry; And then there was that song by The Coasters... 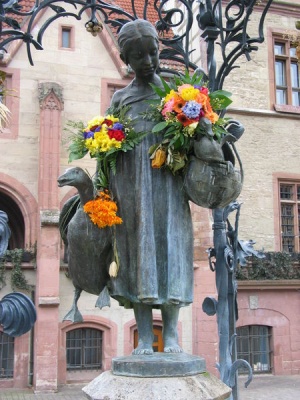 Little Hellkite
76; mine in Colorado

Littlewood, John Edensor (1885-1977)
815; British mathematician. Most of his work was in the field of mathematical analysis. He began research under the supervision of Ernest William Barnes, who suggested that he attempt to prove the Riemann hypothesis: Littlewood showed that if the Riemann hypothesis is true then the Prime Number Theorem follows and obtained the error term. Wikipedia

Ljubica
950; Serbo-Croatian: violet; pron. LYOO beet sah; daughter of Reef Traverse and Yashmeen Halfcourt; the name Ljubica turns up on page 731 (Viking Ed.) of Gravity's Rainbow, as a Herero girl's name. According to Professor Don Larsson (in his Companion's Companion to Gravity's Rainbow), "Ljubica" is a common Slavic name and was also fairly common as a Herero name, as Hereros in Südwest (now Namibia) often bore German and Slavic names.

Loafsley, "Plug"
397; "street-Arab" who delivers note to Chums of Chance

local lunatic
281; for train travelers entering Telluride, like starting a Disneyland ride with this warning: "Beside the tracks at one bend stood a local lunatic"

Lodge, Sir Oliver Joseph (1851-1940)
58; Born at Penkhull near Stoke-on-Trent and educated at Adams' Grammar School, Sir Oliver Lodge was a physicist and writer involved in the development of the wireless telegraph; 228; Wikipedia entry

Lombroso, Dr. Cesare (1835-1909)
172; Born in Verona, Italy, Dr. Lombroso, using concepts drawn from Physiognomy, early Eugenics, Psychiatry and Social Darwinism, devised the theory that criminality was inherited, and that the born criminal could be identified by physical defects, which confirmed a criminal as savage, or atavistic; 252; 606; Wikipedia entry

In Vineland, arch-villain FBI agent Brock Vond is a fan of Lombroso's work.

Lorentz, Hendrik Antoon (1853-1928)
565; Dutch physicist who shared the 1902 Nobel Prize in Physics with Pieter Zeeman for the discovery and elucidation of the Zeeman effect. In 1895 in an attempt to explain the Michelson-Morley experiment, Lorentz proposed that moving bodies contract in the direction of motion (see length contraction; George FitzGerald had already arrived at this conclusion, see FitzGerald-Lorentz Contraction). He introduced the term local time which expresses the relativity of simultaneity between reference frames in relative motion; Wikipedia entry

Lupita's
286; in Telluride, "where the menudo can't be beat"

Lutine
122; of the HMS Lutine Wikipedia