Iamblichus of Chalcis (ca 245 - ca 325)
232; also known as Iamblichus Chalcidensis, was a Greek neoplatonist philosopher who determined the direction taken by later Neoplatonic philosophy, and perhaps western Paganism itself. He is perhaps best known for his compendium on Pythagorean philosophy; 620; Wikipedia entry

Iceland spar
126; Iceland spar is a calcite, which gets its name from "chalix" the Greek word for lime, a most amazing and yet, most common mineral. It is one of the most common minerals on the face of the Earth, comprising about 4% by weight of the Earth's crust and is formed in many different geological environments. Iceland spar is basically clear cleaved fragments of completely colorless (ice-like) calcite, originally discovered and named after Eskifjord, Iceland where the calcite is found in basalt cavities. This special form of calcite became highly prized among scientists and optical instrument makers because it is quite transparent (colorless) and flawless and occurs in huge crystals (up to 7 meters long). Iceland spar is also found in Mexico (Guanajuato), Siberia, Missouri and elsewhere, but the single deposit at Helgustaðir in eastern Iceland was the world's chief source from 1668 to the early 20th century. See this article in PDF format for an excellent account of the properties, importance and history of Iceland spar. This mineral best demonstrates the unique property of calcite called double refraction where, when a ray of light enters the crystal and due to calcite's unique optical properties, the ray is split into fast and slow beams. As these two beams exit the crystal they are bent into two different angles (known as angles of refraction) because the angle is affected by the speed of the beams. A person viewing into the crystal will see two images ... of everything. Note that the text of the dust jacket of the book is split into three, not two overlapping images. A strategic mineral during WWII used for the sighting equipment of bombardiers and gunners. See this website. There is a nifty Java applet here that demonstrates what Iceland Spar looks like when it refracts something and another here that shows actual Iceland Spar at work. Also of interest is the fact that some scientists and historians have argued that the "sunstone," a mysterious item that mentioned in Norse sagas which aided Viking sailors in navigation, might be Iceland Spar. There exists a page that lays out the basis of the theory, though without much detail as to how the process would work."The Book of..." 133; "paramorphoscopes of" 250; Schieferspath, 305-06; Zombini's, 355; aka espato or espanto, 375; double-refraction, 375; 387; 391; 437; 564; "expression in crystal form of Earth's velocity" 688; 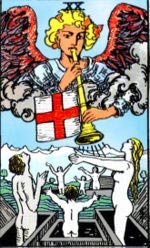 
225; the "Company of Twenty-two," meaning the Major Arcana in the Tarot deck. "They are the ones most capable of damage"; Greek: Icosa- = 20; Dyad, according to the Pythagoreans, is the principle of "twoness" or "otherness" and, generally, is any two entities regarded as a unit; in the Tarot context, "icosadyad" would refer a doubling of Number XX of the Major Arcana of the Tarot deck, Judgement—except that in our context we're to read 20 + 2 instead of 20 x 2; 231; 496; 900; Wikipedia entry

icosahedron
565; polyhedron having 20 faces, but usually a regular icosahedron is implied, which has equilateral triangles as faces. [Etymology: 16th Century: from Greek eikosaedron, from eikosi twenty + -edron -hedron]; Wikipedia entry

Ictibus, The Phenominal Dr.
344; "and His Safe-Deflector Hat"; ictibus is the ablative case for the Latin word "ictus" meaning a "blow" or "strike" - thus, away from a strike, appropriately

Idiocy / Idiots
All references to such in Against the Day

Idiom Neutral
533; an international auxiliary language, published in 1902 by the International Academy of the Universal Language under the leadership of Waldemar Rosenberger, a St. Petersburg engineer; Wikipedia entry

Illyria
816; Illyria (Albanian Iliria "Land of the Free"; Ancient Greek Ἰλλυρία; Latin Illyricum) was in Classical antiquity a region in the western part of today's Balkan Peninsula, founded by the tribes and clans of Illyrians, an ancient people who spoke the Illyrian languages. Wikipedia entry;

images of creatures
277; The ancient Puebloans of both the Mesa Verde and Chaco centers left numerous images, called petroglyphs [1]. They include figures of humans and other creatures, and of comets and the 1054 supernova now known as the Crab Nebula.

Imum Coeli
406; In astrology, the Imum Coeli (Latin for "bottom of the sky"), IC, is the point in space where the ecliptic crosses the meridian in the north, exactly opposite the Midheaven. It is said to refer to our roots and also to the least conscious part of ourselves. It symbolizes foundations, beginnings in life, what may have been experienced through parental inheritance and homeland influences, need for security and relationships with the home and family life; Wikipedia entry


3; Chums of Chance's hydrogen skyship; in Mason & Dixon H.M.S. Inconvenience was a ship that Fender-Belly Bodine once sailed in.

Insh'allah
750; the name Yashmeen signs with in a letter to her father; "learned when and when not to whisper Insh'allah" 760; In šaʾ Allāh (إن شاء الله) is an Arabic term evoked by Arabic speakers to indicate hope for an aforementioned event to occur in the future. The phrase translates into English as "God willing" or "If it is God's will". Wikipedia

Interdikt, das
690; 200-mile phosgene (poison gas) line: "'[Werfner's] plan [...] is — insanely — to install all across the Peninsula, from a little east of Sofia, here, roughly along the Balkan Range and the Sredna Gora, coincident with the upper border of the former Eastern Roumelia, and continuing on, at last to the Black Sea — das Interdikt, as he calls it, two hundred miles long, invisible, waiting for certain unconsidered footfalls and, once triggered, irreversible—pitiless. . . .'"; 946;

Ipsow, Ray
29; colleague of Professor Heino Vanderjuice of Yale University; in Latin, re ipso translates to "the thing itself."

Irredentist
254; In Italian politics (after 1878), an adherent of the party which advocated the recovery and union to Italy of all Italian-speaking districts subject to other countries (OED).

Isandhlwana
22; "massacre of British troops at"; On January 22, 1879, Isandlwana was the site of the Battle of Isandlwana, where over 20,000 Zulu warriors defeated a contingent of British soldiers in the first engagement of the Anglo-Zulu War. Almost the entire column of about 1,200 British soldiers was killed, and the regimental colours were lost; Wikipedia entry

Isola degli Specchi, aka Isle of Mirrors
244; island of mirror-makers in Venice, 569;

Ivanoff, Nikola
963; his "Second Army"; Ivanoff (or Ivanov) commanded Bulgaria's 2nd Army during the Second Balkan War. The war began when Bulgarian high command, without notifying the government, ordered Bulgarian troops to attack Serbian and Greek positions. Bulgaria hoped to acquire all of Macedonia and dominate the Balkans. The 2nd Army was tasked with an attack towards Greek positions towards Salonika.

I Zingari
966; "team of nomads" in cricket; I Zingari (from the Italian for "the Gypsies" - should be "Gli zingari") is an English amateur cricket club which was formed on 4 July 1845 by a group of old Harrovians at a dinner party and thus is one of the oldest cricket clubs still in existence. "Harrovians" are graduates of the Harrow School, (originally: The Free Grammar School of John Lyon; generally: Harrow), one of the world's most famous schools. It is an independent school for boys, located in Harrow on the Hill in the London Borough of Harrow.