The Explorigator by Harry Grant Dart 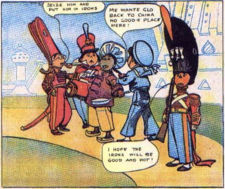 Harry Grant Dart's comic for the newspaper The World, The Explorigator, featured the boy crew of "The Explorigator, a fantastic airship that traversed the universe. It was manned by Admiral Fudge, a youthful adventurer and inventor, accompanied by a group of friends, also children his age (around nine or ten): Detective Rubbersole, Maurice Mizzentop, Nicholas Nohooks, Grenadier Shift, Teddy Typewriter, and Ah Fergetitt. The Explorigator ran for 14 weeks in 1908 and made an impression for its imaginative and visual creativity. [1]

Harry Grant Dart was born in 1869 in Williamsport, Pennsylvania. His first job was rendering crayon portraits for the National Crayon Company brochures. He drew for the Boston Herald in the mid-1890s, but it was when The New York World arranged to send Dart to Cuba that his active newspaper art career began. In 1898, he was sent to Cuba by The New York World to cover the Spanish-American War as an artist. He sketched many important events (such as political conventions) in the days before photos were printed in newspapers. Dart rose to be the art editor for The World, and it was from this position - and utilizing the techniques he employed in many freelance cartoons for Life - that the comic The Explorigator was conceived, to rival the popular Little Nemo by Winsor McCay in The New York Herald. [2]

Dart did many amazing illustrations of futuristic aircraft for various magazines, great examples of a subgenre of speculative fiction called "Steampunk" which came into prominence in the 1980s and early 1990s. The term denotes works set in (or strongly inspired by) an era when steam power was still widely used — usually the 19th century, and often set in Victorian England — but with prominent elements of either science fiction or fantasy, such as fictional technological inventions like those found in the works of H. G. Wells, or real technological developments like the computer occurring at an earlier date.