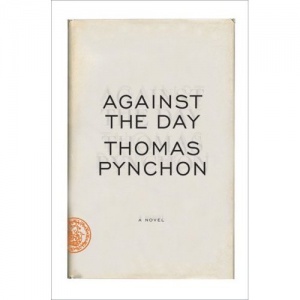 Earlier version of the cover 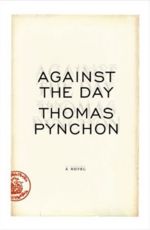 Against the Day
Final cover - design by Michael Ian Kaye

The final cover of Against the Day is pretty minimalist, depicting an aged, slightly yellowing book or manuscript in reference to the novel's setting, 1893 through World War I, and the book's mock-recreation of prose from that era.

We also know that an earlier version of the cover was circulated in promotional material before the novel's release. Note that in the earlier cover, the red seal looks slightly different, with the writing continuing in an unbroken circle. The slight changes indicate that Pynchon was probably involved in the design process, as he was with Mason & Dixon (where the ampersand was changed at his request), and the cover is thus fair game in any textual analysis.

The book cover is designed by Michael Ian Kaye, who also designed the cover for the current paperback edition of Slow Learner. This seems to indicate that Pynchon likes Kaye's previous work.

The generally white color of the cover ties in with the light/dark metaphor that Pynchon weaves into the novel. Perhaps the cover is also largely bare so that the "reader can decide," as Pynchon writes in the book's description, with minimal outside interference from anything but the text itself.

The writing on the cover seems to cast shadows behind it. The shadows are likely meant to simulate the double refraction one experiences when looking through a piece of Iceland Spar, but on closer inspection the writing is not doubled, but tripled, and the typefaces are different. The upper layer is a modern sans-serif font, the middle layer is an older serif font, and the bottom layer is once again a modern sans-serif font. This corresponds nicely with the fact that the novel straddles the period where the world moved from the 19th century into the modern age. It could also represent the book in parallel universes seen through the spar.

If we assume that the "grey" title and author's name are indeed shadows then it would seem that the shadows are cast from more than one light source - and it may be from more than two light sources too as not all the letters appear to be shifted to the same degree and direction in the "shadows". Again this may be taken as representing that the book should be viewed from - or in fact is presented as from - several different perspectives as to time, place, political position etc.

Of course it should also be borne in mind that if the grey titles and author's name were shadows, there would only be one typeface, so perhaps this is all going up the wrong path! Maybe it is merely overprinting, and the version of the book we have is the third draft of the novel, and the different typefaces somehow reflect something about the imperatives or forces behind the re-drafting.

In another instance of doubling, the ARC of the U.S./Penguin edition of Against the Day has white wraps (covers) with black lettering, whereas the British/Jonathan Cape ARC has black wraps with white lettering (the published hardcover is the same as the U.S. edition, however). Both ARC's are quite rare — 200 of the Penguin and 77 of the Jonathan Cape.

The summit in the seal is Mt. Kailasch, considered the center of the world by both Hindus and Tibetan Buddhists. It also is considered the headwaters of the main river systems in nothern India, including the Indus and Ganges. The Kailasch in the seal, along with the foothills, and rivers bear a strong resemblance to traditional representations in thangka paintings.

The text in the seal is written in the Tibetan umé script, and can be represented (using the Wylie transliteration scheme) as: bod gzhung tshong gi don gcod (pronounced: bö shung tsong gi dön tjö), which means: Trade Representative of the Tibetan Government.

A slightly different translation is provided by somebody who posts regularly to Pynchon-l under the name "Ya Sam", who reports that :

I contacted the Tibetan Cultural Centre with the request to translate the mysterious legend on the AtD seal. They were kind enough to forward my request to the Tibetan tranlsator Tenzin Namgyal to whose generosity we owe the solution of one more ATD related mystery.

It is the Tibetan language, alright, and it means ...... Tibetan Government Chamber of Commerce.

Read their response below:

Dear Ya Sam,
I showed the seal you sent to our Tibetan translator, Tenzin Namgyal. He says the word to word translation is: Tibetan Government Commerce Chamber in other words: Tibetan Government Chamber of commerce. Why Pynchon has chosen to place this on the cover of his book is anyones guess. Reading the book reviews gave no insight into the reason. Perhaps after one has read it?

Additionally, the front and back covers and spine depict a "picture" of the book, Against the Day (note how the seal is broken, and the cover depicted contains fine details such as edge-rubbing and even small tears to the dust jacket at lower front edge).

This is another instance of a doubling/layering of the real and unreal, the actual and represented worlds, the past and the present. But notably, also, the cover is similar to the postcard Veikko receives from his sister in Finland (p. 84), upon which both the stamps and postmarks are "not real . . . pictures of postmarks" (which had been invalidated by the Russians). Webb calls it a Minneskort, "a postcard with a picture of what a postcard used to look like . . . ." "Memory card," Veikko clarifies, "a memory of a memory."

The first edition of Against the Day was issued with two different bindings beneath the dustjacket: One variant has a light green back over khaki boards, and the other variant has a red-brown back over cream-colored boards. This variation in the bindings could be a simple matter of the availability of binding material, but it is tempting to read it as another instance of the doubling motif of the book.

Over the last 30 years, for blockbuster authors from Dean Koontz and Danielle Steel to Joan Didion and John Cheever, a whole design style has sprung up called "the big book look." Its chief elements are a large author name, a large title and, often, a smallish iconic image. The goal is to make the book "pop" on the shelf, to make it more "punched out and vibrant," in the words of Jonathan Burnham, the publisher of HarperCollins.