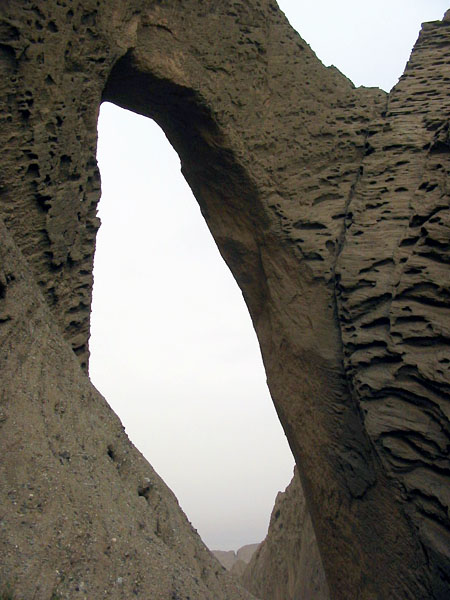 For many years the Guinness Book of World Records had this listing for the highest natural arch in the world:

The highest natural arch is the sandstone arch 25 miles west-southwest of K'ashih, Sinkiang, China, estimated in 1947 to be nearly 1,000 feet tall, with a span of about 150 feet.

This listing was later dropped when Guinness editors could not locate the 1947 reference and also visited the area and could not find the arch. The arch was re-located by westerners and reported in the December 2000 issue of National Geographic in an article entitled "Journey to Shipton's Lost Arch." The arch was first reported in the west by British mountaineer Eric Shipton in his 1947 book Mountains of Tartary. The arch is not sandstone but a very crumbly conglomerate, and is located not west-southwest but west-northwest of K'ashih (Kashi).

Courtesy of The Natural Arch and Bridge Society Website

This file contains additional information, probably added from the digital camera or scanner used to create or digitize it. If the file has been modified from its original state, some details may not fully reflect the modified file.
Retrieved from "https://pynchonwiki.com/wiki/index.php?title=File:Tushuk-Tash.jpg&oldid=13084"