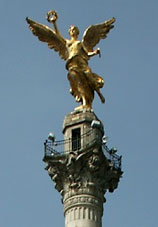 El Ángel was built to commemorate the centennial of the beginning of Mexico's War of Independence, celebrated in 1910. In later years it was made into a mausoleum for the most important heroes of that war. It is one of the most recognizable landmarks in Mexico City, and it has become a focal point for both celebration or protest. It bears a resemblance to the Victory Column in Berlin. Wikipedia entry

The following page links to this file: