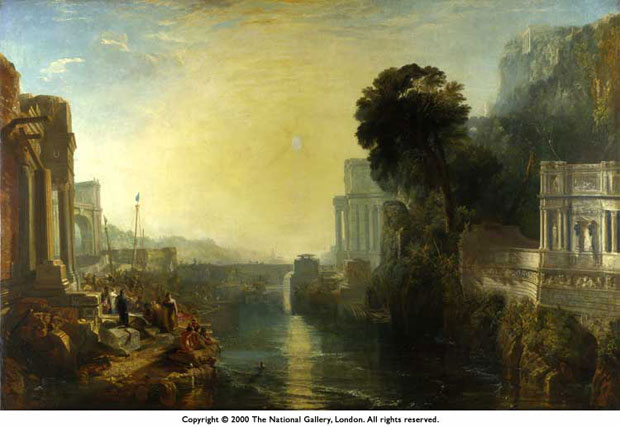 Dido building Carthage, or The Rise of the Carthaginian Empire (1815)

One of Turner's most ambitious imitations of the 17th-century French painter Claude. The subject, inspired by Virgil's epic Latin poem, the Aeneid, is the building of the North African city of Carthage, which Dido founded. The figure in white on the left is Dido, and on the right is the tomb erected for her dead husband, Sichaeus. In front of Dido is a figure who may be Aeneas: Virgil tells of their love affair, and of Dido's suicide following his departure. Turner was attracted by the human contrast to the theme of empire building. Hints of doom contrast with the serene effects of sunlight.

In Turner's will he asked for this and his Sun Rising through Vapour to be hung between Claude's Seaport with the Embarkation of the Queen of Sheba and Landscape with the Marriage of Isaac and Rebecca at the National Gallery.

The following page links to this file: